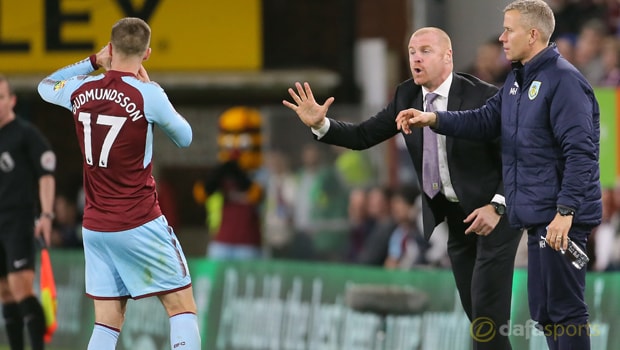 Sean Dyche has praised Burnley for battling away with Chelsea on Thursday and feels his men are still moving in the right direction.

Burnley have enjoyed an incredible Premier League campaign, having started out as favourites to go down, they currently sit within touching distance of the Europa League.

Their campaign kicked off with a dramatic victory over Chelsea at Stamford Bridge and the have since gone from strength to strength.

Thursday’s clash provided Burnley with the opportunity to close the gap on Chelsea, however, they were left heartbroken at Turf Moor.

Kevin Long put through his own net after 20 minute before Ashley Barnes pulled the Clarets level just after the hour mark.

Victor Moses, who put in a man of the match performance, proved the match winner just minutes later when he fired home right-footed.

Burnley remain in seventh, 11 points shy of the Blues, while they trail sixth-placed Arsenal by two points, although the Gunners have a game in hand.

Dyche hailed the mentality of his players to battle back into the game and believes his men have continued to develop over the course of 2017-18.

“You’ve got to bear that in mind and realise we’ve moved forward a long way but there’s still a gap between clubs like ourselves and the top six, without a shadow of a doubt,” Dyche said.

“I’m more pleased about our mentality, you go in at half-time 1-0 down, they’ve had a couple of good chances, and that can get away from you.

“But our mentality to take the game on second half and try and affect it, that serves you well over a season as it has done already.”

Burnley are priced at 3.40 to win their next Premier League outing on Sunday when they travel to Stoke, who can be backed at 2.30, while the draw is available at 3.20.