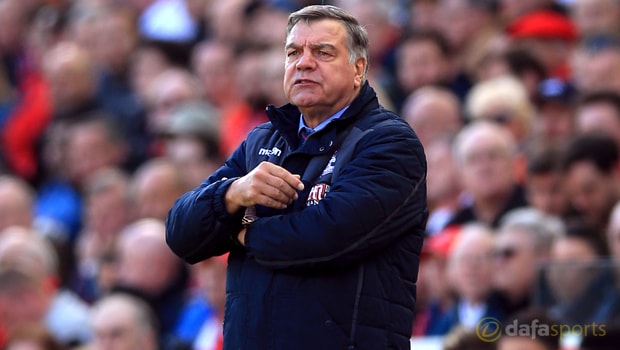 Sam Allardyce believes his Crystal Palace side have taken a huge step towards survival courtesy of Sunday’s 2-1 win over Liverpool.

The Eagles arrived at Anfield aiming to win at the ground for the third straight season but looked in trouble when Philippe Coutinho opened the scoring midway through the first half with a wonder free-kick.

However, a brace from Christian Benteke on his return to Liverpool following his summer move gave Palace a fifth win in seven games and moved them up to 12th.

With five matches to go they now look almost safe, having established a seven point lead over 18th-place Swansea.

Wednesday sees them welcome Tottenham to Selhurst Park for a clash they are 5.25 to win, with the draw 4.00 and Spurs 1.67.

They then have outings against Burnley, Manchester City, Hull and Manchester United before the end of the season.

Allardyce arrived at Palace in December and after a slow start, now seems to be weaving the magic that has made him so successful as a survival specialist throughout his career.

The 62-year-old concedes he and his players have put in plenty of work over the last few months but feels Sunday’s result was the culmination of their efforts.

“It has been hard work but we are looking up,” he told reporters.

“We have five games to go but Tottenham on Wednesday will come too early.

“We will have to change the side to get fresh legs into the side. It is a big result today, it makes life so much easier.”