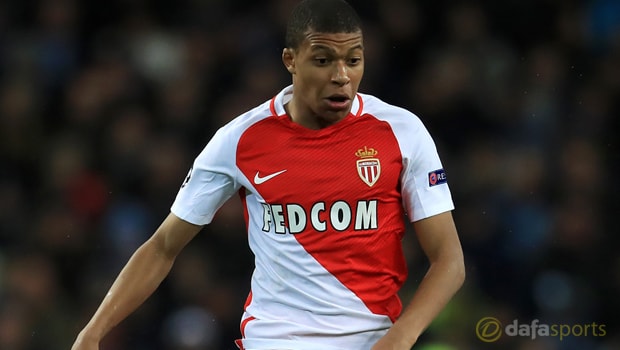 Goals from Mbappe and Radamel Falcao saw Les Monegasques draw back level with Paris Saint-Germain at the top of the standings, with them still having a game in hand.

Leonardo Jardim’s men have lit up Ligue 1 this season and Sunday’s trip to Stade OL appeared to be the toughest of their remaining fixtures.

It now seems this exciting young side are within touching distance of the club’s first domestic title since 1999-00, while they are also through to the semi-finals of the Champions League where they will face Juventus.

Mbappe, 18, has been one of the revelations of the season and is among those being tipped for a big-money move away from the Stade Louis II in the summer.

Monaco have pledged to try and keep as many of their players as possible and there is a feeling that the current squad could go on to dominate Europe if they stick together.

Mbappe admits winning at Lyon has given their title hopes a massive boost but insists they still plenty of work to do.

“This is an important step for the title,” he told reporters. “There are not many teams that have won in Lyon.

We know that there are four games to be won, with the sequence they will all be difficult. The championship is far from over.

“Lots can happen from one game to another. It is up to us to be well concentrated for Toulouse next Saturday.”

Monaco are currently the 8.50 outsiders to win the Champions League, with Juve the joint 2.63 favourites alongside Real Madrid, while Atletico can be backed at 5.00.