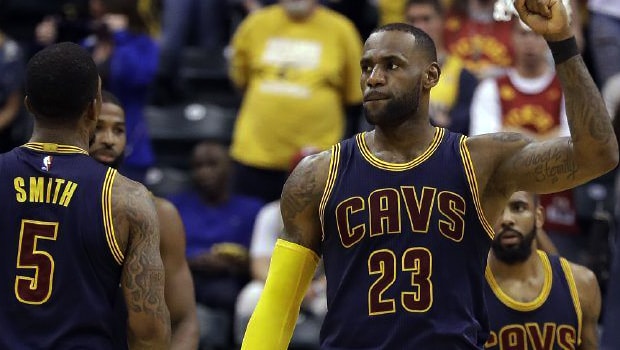 Cleveland coach Tyronn Lue believes his team’s defensive improvement in Sunday’s 106-102 win over Indiana bodes well for the remainder of the play-offs.

The Cavs became the first team to book their place in the second round of the post-season as they completed a 4-0 sweep over the Pacers in Indianapolis.

LeBron James was the star, scoring 33 points as he played 45 of the 48 minutes of a pulsating Game 4 at Bankers Life Fieldhouse.

The victory saw the small forward set a new all-time record of 21 straight wins in first-round matches and will only have boosted his side’s confidence levels as they go looking to defend their NBA crown.

Cleveland are 4.50 to win the Championship, with the Western Conference’s Golden State Warriors the massive 1.53 favourites.

For all the fanfare surrounding James, his coach was keen to focus on other areas where he felt they had shown signs of improvement in Game 4.

Their defence has been a particular concern for Lue this season but they seemed far more effective in stopping the Pacers on Sunday.

With the series being far more competitive than the 4-0 scoreline suggests, the coach feels their increased intensity without the ball made the difference in getting them over the line against an improved Indiana outfit

“Defensively, I thought we took a step forward,” Lue said.

“And that’s all I wanted to see. I know we can score the basketball. Getting the stops is most important.

“All these games came down to the wire and when we needed to get stops, we got stops.”