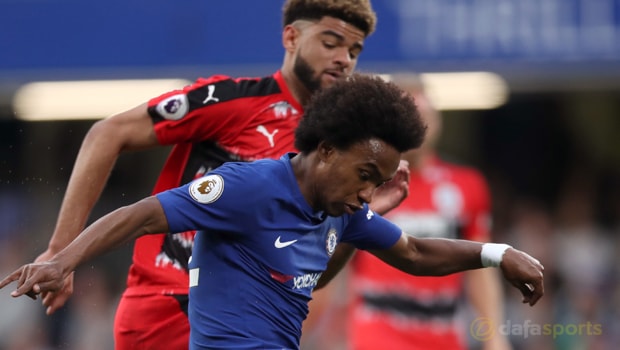 Chelsea forward Willian admits it was frustrating to spend so much time on the bench last season but claims he respects Antonio Conte’s decision.

The winger boasts over 150 appearances for the Blues following his move from Russia outfit Anzhi Makhachkala in the summer of 2013.

Willian proved to be a key figure in his first few seasons but he fell down the pecking order last term, with Conte only starting him in 20 Premier League games.

He still managed to find the back of the net on six occasions and fortunately did enough to earn a place in Brazil’s World Cup squad.

Despite his lack of action, he still managed to win the vote for the club’s players’ player of the season but he was overlooked for the FA Cup final victory over Manchester United.

Conte named Willian on the bench four times in their final five games of the season and he admits he was starting to become frustrated.

But the 29-year-old insists he respects the decisions made by Conte, who could be on his way out this summer, and now just wants to focus on enjoyed a positive World Cup campaign.

“I was happy with my performance during the season, I played very well I always try to do my best and work hard,” Willian said.

“Sometimes to stay on the bench is difficult but I respect the decision of the manager.

I think it was that I don’t have nothing more to say about my club because now I want to have focus here on the national team and the World Cup.”

The Selecao made it to the semi-finals at the 2014 World Cup and they can be backed at 5.00 to go on and win the tournament in Russia this summer.