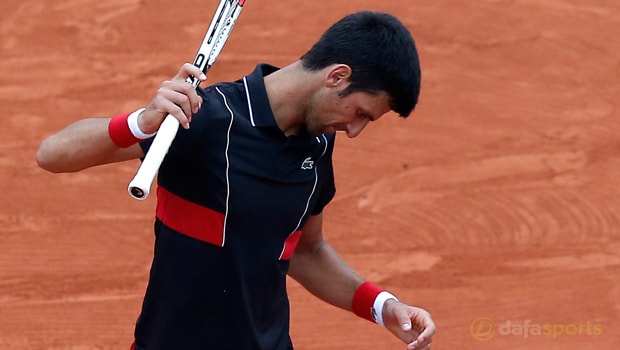 Novak Djokovic says he is not sure whether he will take up his place at Wimbledon after suffering a shock exit at the French Open.

The Serbian has endured a tough 2018 and had to undergo surgery to address an issue with his elbow earlier in the season.

Many suspected that he could struggle at Roland Garros due to a lack of competitive action but he proved his doubters wrong, making it through to the quarter-finals without any drama.

Djokovic dropped just one set before going up against Marco Cecchinato in the last-eight on Tuesday and he was expected to ease through to the semi-finals.

However, Cecchinato, who had never won a main-draw match at a Grand Slam prior to this year’s Roland Garros, shocked Djokovic to set up a clash with Dominic Thiem on Friday.

The 12-time Grand Slam champion was clearly frustrated following his defeat but admitted that Cecchinato was a deserving winner.

Djokovic said: “The one that won deserved to win the match, and that was Marco today.

“I know him well. He’s a great guy. He deserved. And that’s something everybody should do.”

Djokovic has struggled for consistency over the last year-and-a-half, having failed to go beyond the quarter-finals at a Grand Slam since the 2016 US Open, and he admits that he is not sure whether he will even take part in the next stage of the season.