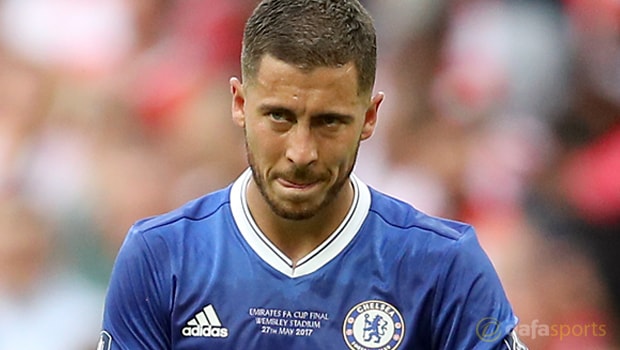 Chelsea goalkeeper Thibaut Courtois says Eden Hazard needs to be given time to get up to speed and so expectation levels should be kept low for now.

Hazard is yet to feature for the defending Premier League champions this season as he continues to recover from surgery after fracturing his ankle on international duty in June.

The 26-year-old is in contention to feature for Saturday’s trip to the King Power Stadium to take on Leicester City after making his return to competitive for Belgium in the recent 2018 World Cup qualifiers.

Roberto Martinez’s men picked up victories against Gibraltar and Greece – guaranteeing their place in Russia next year – and Chelsea’s star forward made substitute appearances in both matches.

It is unclear whether or not Hazard will be risked for the clash against the Foxes but, if he does make his first league appearances of the season, club and international team-mate Courtois has called for calm.

“He is ready, he is doing well and is ready to play,” he told Sky Sports News.

“But we cannot forget he was injured for four months, he had surgery. You have to go little by little I think.

“We are excited to have him back and I was happy to have him on the pitch with me against Gibraltar and Greece. I hope we can see the best Eden Hazard very soon.”

Chelsea, who lost to Burnley on the opening day of the season, are firm 1.75 favourites to pick up all three points at Leicester. The draw is priced at 3.75 while the hosts are 4.50 outsiders.

The clash could see Danny Drinkwater take on his former employers, with the England international making the switch to Stamford Bridge on deadline day for £35million.