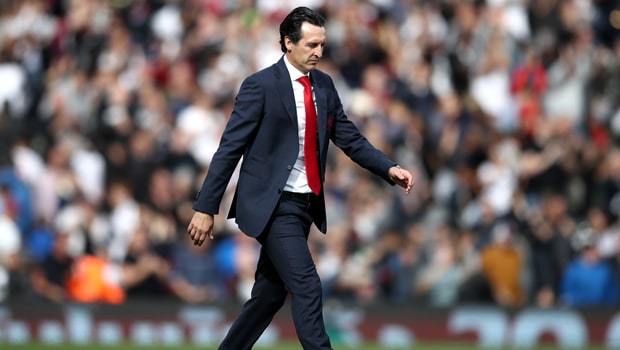 Manager Unai Emery suggests Arsenal have belief in the process they are going through after a 5-1 win at Fulham saw them climb into the top four.

After losing their opening two games against Manchester City and Chelsea – a duo that now join Liverpool in topping the table – Arsenal have won six games on the bounce in the league.

Alexandre Lacazette and Pierre-Emerick Aubameyang both netted doubles against Fulham, while Aaron Ramsey came off the bench to score the crucial third goal for his team midway through the second half.

Emery replaced Arsene Wenger in the summer and the Spaniard appears to have brought the feel-good factor back to the club, with chants of “we’ve got our Arsenal back” ringing out from the travelling Gunners at Craven Cottage.

It has been a good start for Emery but he suggests the hard work has only just started in what he feels is the toughest league in the world.

“I believe in us. We believe in our process but also we must keep taking confidence,” he said.

“I think we are in the first competition in the world. It is very difficult but we must prepare, continue improving and show big commitment.”

Wales international Ramsey drew special praise from this boss afterwards. The 27-year-old is out of contract next summer and talks over a new deal have stalled with the club, but Emery felt he showed his worth after replacing Alex Iwobi.

“He did not start in the first XI today but when he was on he scored within a minute and that gives confidence for both him and us,” Emery said.

“We are happy because I think this shows the commitment we have in training and the quality and the understanding of our tactical position.”

Despite their current form, Arsenal are 41.00 to win the title this season, while they can be backed at 2.50 to finish in the top four.