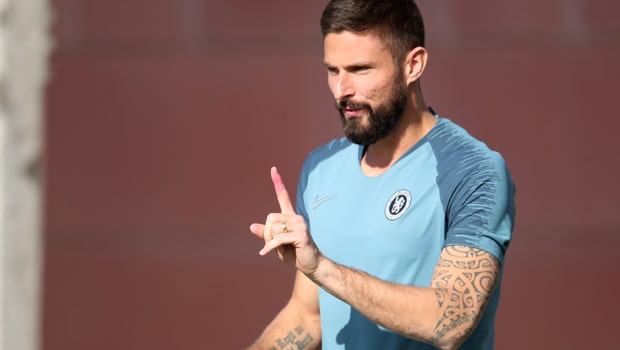 Olivier Giroud says he is not seeking a move away from Chelsea at the moment and will do everything he can to force his way back into Maurizio Sarri’s starting 11.

Giroud was given the nod ahead of Alvaro Morata at the start of the season but, after failing to open his Premier League account from nine appearances, has been demoted to the bench in recent weeks.

To make matters worse for the Frenchman, Spaniard Morata has made the most of his opportunity, with a brace in the 3-1 victory against Crystal Palace at the start of November the highlight to date.

Several reports have claimed Giroud, who only moved to Stamford Bridge from Arsenal in January, is seeking an exit in the upcoming window, with a loan move to Marseille mooted.

However the 32-year-old, who helped Les Bleus win the 2018 World Cup in Russia, is in no mood to back down from a challenge and insists he will fight for his Chelsea future.

Speaking on Telefoot, he said: “I was being asked the same questions before the World Cup. I am going to fight and for the moment it is not a question about seeking a departure. I am going to stick in there – and do not expect me to give up.”

Chelsea return to action on Saturday with a tricky clash against Tottenham Hotspur at Wembley and Giroud will be hoping to get the nod from Italian tactician Sarri.

The Blues are narrow 2.50 favourites to clinch the spoils, a draw is priced at 3.40 whilst Spurs, who are just one point and a place behind their opponents, are a 2.80 chance.