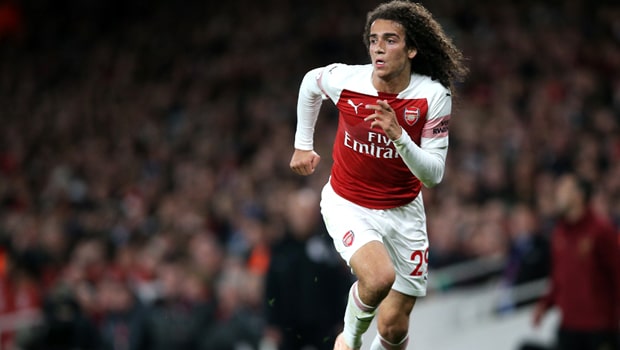 Arsenal midfielder Matteo Guendouzi says he pleased with his and the team’s performances this season and is hoping to continue helping the club push for silverware.

Guendouzi was one of five new arrivals at the Emirates this summer and he has been a prominent figure in the first team under manager Unai Emery, with the Frenchman making nine Premier League appearances.

After a testing start to the season which resulted in back-to-back losses to Manchester City and Chelsea, Arsenal have embarked on a 16-game unbeaten run across all competitions.

The Gunners are already into the knockout stage of the Europa League with two group games to spare and are also sitting fifth in England’s top flight, eight points adrift of defending champions and table-toppers City.

France Under-21 international Guendouzi has been happy with the impact he has made with his new employers and has put the good run of form down to the togetherness of the squad.

“I’m very happy about my start,” he said.

“After that, the most important thing for me is the team, we’re on a good run of 15 or 16 games without a loss, which is something we need to continue on.

“We’ve drawn the last three games in the league, but we’re a very solid team, and I hope we can do great things.

There’s a really good togetherness in the group, and that’s why we’ve made a good start to the season.

“It really is everyone together. There’s no specific groups, and it shows on the pitch.”

Arsenal return to action on Sunday when they travel to Bournemouth and the visitors are 2.05 favourites to leave the Vitality Stadium with all three points, whilst a draw and home win are both priced at 3.60.