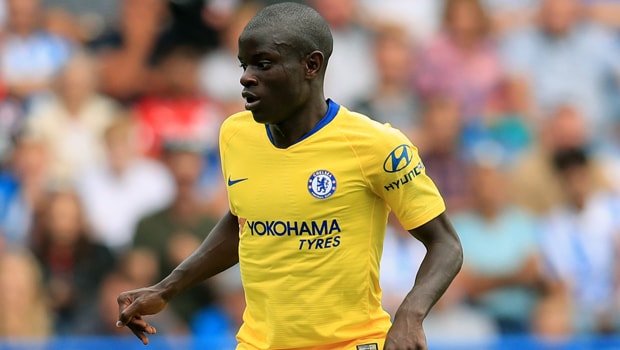 The France international, who played a major role in his country’s triumph at this summer’s World Cup, has been largely deployed as a defensive midfielder during his time in England with Chelsea and Leicester.

Indeed, prior to the start of this season the 27-year-old had only scored three goals in the Premier League, although he is already off and running this term after he netted the Blues opening goal in their 3-0 victory at Huddersfield on Saturday.

Kante was able to score in that match after being deployed in a more advanced position by new boss Sarri and he admits it is a role he has been practising throughout pre-season.

“Now the system is ­something ­different, especially the way we play now,” Kante told the Mirror.

“So, even during the ­holidays, we were thinking and talking about how to adapt. It will require a lot of sacrifice from us all, so that is why I have to continue ­moving forward as a player.”

Kante is certainly not concerned by his change in position and the different responsibilities that come with it, as he believes it is always important to be adaptable if you want to have longevity in any team.

“I have worked with ­different managers in the past and different systems,” he added.

“The best way to always keep your position [in the team] is to ­remain focused and have the same attitude towards ­everyone. So that is what I am going to try to do again this season.”

Chelsea are next in action when they play host to Arsenal in the Premier League on Saturday and they are priced at 1.80 to win that heavyweight tussle, while the Gunners are available at 4.20 and the draw is on offer at 3.80.