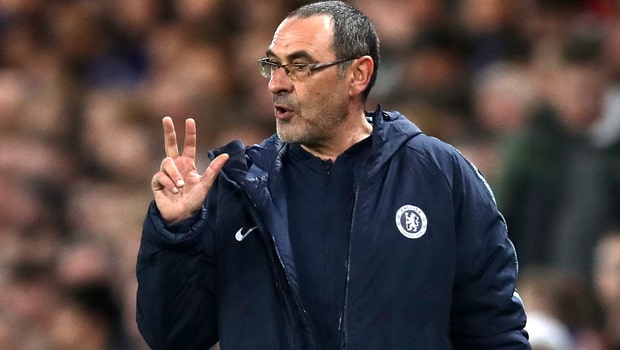 Chelsea are through to the semi-finals of the Europa League, but manager Maurizio Sarri wasn’t happy with their start to the second half.

The Blues won 4-3 on the night at Stamford Bridge, 5-3 on aggregate against Slavia Prague but they were 4-1 up at half-time and seemingly assured of a place in the last four.

However, doubts were placed in the minds of some home fans when the away side scored twice within three minutes. In the end Chelsea held on for the win but the slow start to the second period is becoming something of a trend.

In recent weeks Sarri’s side have conceded early second-half goals against Everton, Cardiff and Liverpool to threaten their place in the top four of the Premier League.

Sarri said after progressing through to the semi-finals of the Europa League: “We played very well in the first half, but as usual in the last two months, we started very badly in the second half.

“We need a solution but I’m really really happy because we played well in the first 45 minutes and we are in a European semi-final which is very important to us.”

Pedro scored two of Chelsea’s goals on the night with Olivier Giroud getting on the scoresheet while they also had an own goal, Simon Deli putting through his own net.

Chelsea now play Eintracht Frankfurt in the last four of the Europa League and it could be an all-Premier League final with Arsenal in the other semi where they will play Valencia over two legs.

Chelsea are 2.38 to win the Europa League with Arsenal 3.00. Sarri’s side are back in action on Easter Monday when they welcome Burnley to Stamford Bridge as they look to get back into the top four of the Premier League.

They are currently fifth, level on points with fourth-placed Arsenal but having played a game more.