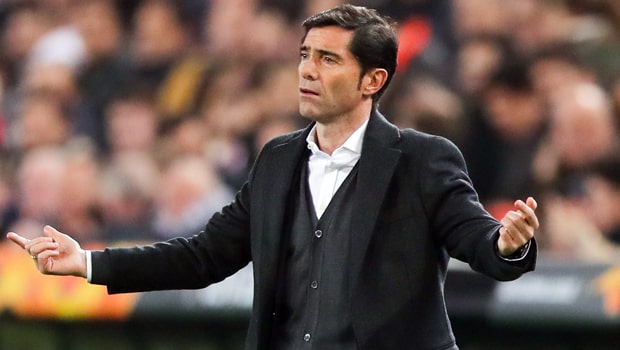 It was an all-Spanish affair in Thursday’s last-eight encounter as Valencia made the trip to Villarreal for the first leg and the visitors got off to the perfect start when Goncalo Guedes turned home the rebound from Dani Parejo’s missed penalty on six minutes.

However, the Yellow Submarine were back on level terms half an hour later when former Arsenal midfielder Santi Cazorla converted from the spot, leaving the scores level at the break at 1-1.

After the restart, it was the hosts who looked the more threatening and they were only denied more goals due to the brilliance of travelling goalkeeper Neto, who produced a number of top-class saves.

The Brazilian’s stops proved to be crucial as stoppage-time strikes from Daniel Wass and Guedes gave Los Che a commanding 3-1 advantage heading into next week’s second leg at the Mestalla.

Speaking about Neto and the performance, Marcelino said in quotes reported on UEFA.com: “Neto was brilliant I’d say. But to consider just one player responsible for a result, in my modest opinion, isn’t feasible.

“The collective makes individuals great. But Neto made some saves which kept us at 1-1 for a long time. We started really well, 1-0 up and two big chances for 2-0. But from the moment it went 1-1 Villarreal had opportunities to score. Neto played really well for us.

“The last 15 or 20 minutes I’d say we dominated. Villarreal were high up the pitch late on, looking for 2-1. We created good dangerous opportunities and scored two magnificent goals. That means we leave here with a big result, possibly bigger than the performance of the other team would suggest.”

Valencia are priced at 5.50 to go on and win the Europa League while Villarreal are a massive price at 101.00 as they have it all to do to turn around in the return leg.