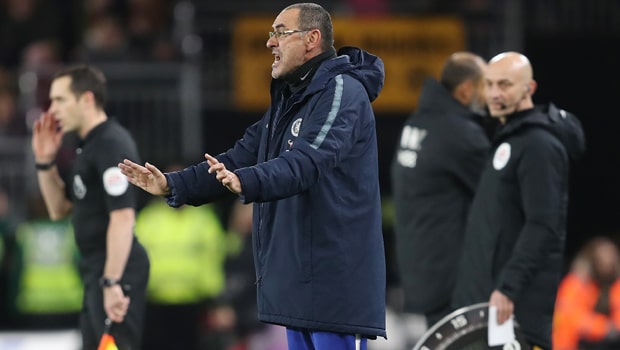 Maurizio Sarri felt over-confidence had played a part as Chelsea surrendered a lead in losing 2-1 at Wolves on Wednesday evening.

Ruben Loftus-Cheek had put the Blues in front via a heavy deflection in the first half, while the visitors also went close through N’Golo Kante and Eden Hazard.

Chelsea looked to be denied a sure-fire penalty early in the second period when Alvaro Morata was felled with the goal at his mercy.

Chelsea pushed hard for a late leveller, Hazard and Cesc Fabregas firing over with their best chances and the Italian boss was displeased with what he saw at Molineux.

“After this match we are less confident but maybe it’s better because sometimes my players show me that they have too much confidence,” said Sarri.

“We played well for 55 minutes. After the goal for 1-1, which was an accident because we were in full control of the match, we were suddenly another team without the right distances and without our football.

With Manchester City next up at Stamford Bridge on Saturday evening, Sarri suggests that displacing the champions this season is already beyond his team, who must aim for the top four. “Manchester City are in another category.

Chelsea are 3.60 to beat Man City on Saturday. The league leaders are favourites at 1.95 while the draw is priced at 3.75.