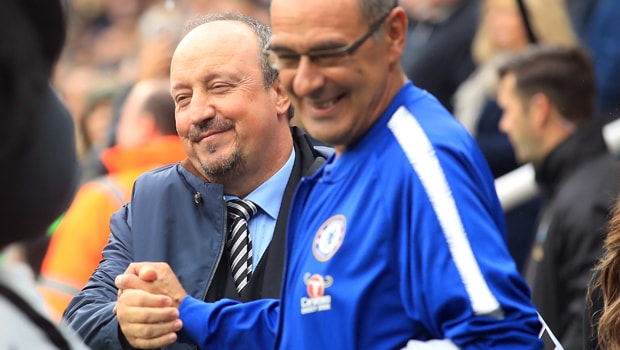 Maurizio Sarri suggested he was surprised by Rafael Benitez’s tactics in Chelsea’s 2-1 victory at Newcastle at St James’ Park.

The Italian made it three wins in three Premier League games, but only by a slender margin when DeAndre Yedlin put through his own net with three minutes remaining to hand Chelsea the points.

Newcastle were set up to frustrate and their tactics largely paid off. The visitors only made the breakthrough via Eden Hazard’s controversially awarded 76th-minute penalty, which was then cancelled out by Joselu with seven minutes to play.

“I was surprised at Rafa,” Sarri told Sky Sports.

“In Italy, I have never seen him play with five defenders so I was really surprised.

“The match was very difficult, they were so low and compact, it was impossible to have spaces. “We got better in the second half but it was a very difficult game.

“I think we showed improvement because the match was difficult it was not easy to play well.”

Hazard started for the first time under Sarri and was named man of the match. The Belgian had five attempts on goal, while he completed 91 of his 101 passes successfully, to the delight of his boss.

“Maybe it was better it he played for 75 or 80 minutes, but (Mateo) Kovacic asked for the sub so it was impossible [to take him off].”

Chelsea, now 11.00 to win the title this season, are 1.29 to make it four wins in four by taking care of Bournemouth at Stamford Bridge on Saturday.