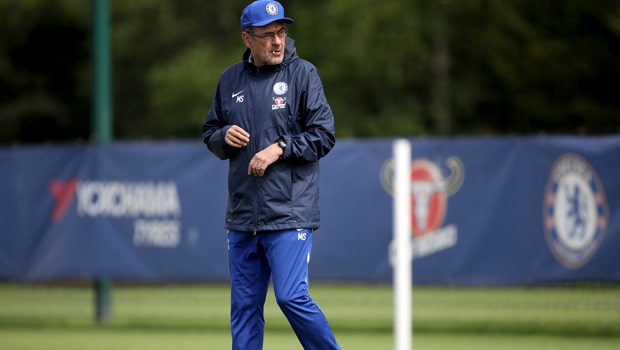 Chelsea boss Maurizio Sarri says that he will sit down with the club to discuss his future after their Europa League final against Arsenal next week.

An often turbulent first season at Stamford Bridge will end with the match in Baku and the chance to win some silverware, after finishing third in the Premier League and qualifying for next season’s Champions League.

Sarri has two years remaining on his contract but there has been speculation on his future, with a move to Juventus seen as a possibility.

Sarri said however that he was happy in the Premier League and will wait until after the final to discuss his future further. He said: “It is very exciting to be here, but now it is time to think of the final.

“I have no contact with other clubs. I have to speak with my club after the final. I want to know if they are happy with me.

Though a third-place finish in the Premier League as well as a European final could be judged a success in his first season in charge, Sarri has not yet won over all Chelsea fans, with some unhappy at the style of play.

Sarri also confirmed that both Callum Hudson-Odoi and Ruben Loftus-Cheek will miss the Arsenal game with injury.

“The final is usually an open match and Ruben would have been very important for us. Arsenal have two dangerous strikers and they are very dangerous as a team in the offensive phase,” he added.