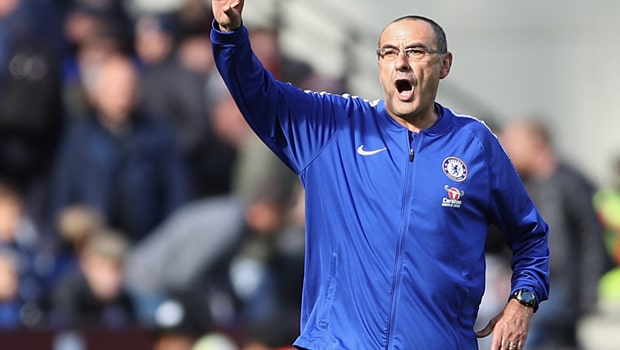 Maurizio Sarri says he is happy with what he has seen from his Chelsea side so far this season even though the club’s perfect start to the campaign ended at West Ham United on Sunday.

Many were unsure what to expect from the Blues this season following the appointment of Sarri in the summer but the former Napoli boss has enjoyed a fruitful beginning to his reign at Stamford Bridge.

Chelsea won their first five Premier League fixtures of the campaign – beating Huddersfield Town, Arsenal, Newcastle United, Bournemouth and Cardiff City – whilst a Europa League win was also picked up away at PAOK.

With Liverpool returning to the top of the table after beating Southampton 3-0 on Saturday, the pressure was on Sarri’s men to keep pace and record a win at the London Stadium on Sunday.

But, a resurgent West Ham produced a gutsy display on home soil and the two sides played out a 0-0 draw, ending Chelsea’s 100 per cent start to the season. Many are wondering whether the bubble has burst for the 2016/17 English champions, but Sarri is not worried about dropping two points and insists his team are a work in progress.

“We need to move the ball quicker and we need more movement without the ball,” he told reporters.

“I think we have played well in the second half, but it’s impossible to win every match and a point is OK.”

Chelsea return to action on Wednesday night when they take on Liverpool at Anfield in the Carabao Cup and the visitors are 3.50 to pick up the win, a draw is priced at 3.60 whilst the Reds are 2.00 favourites.