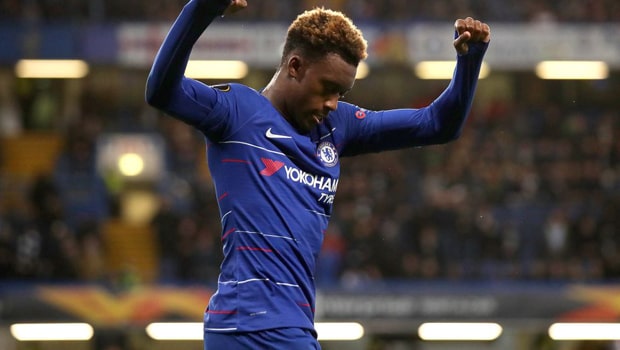 Callum Hudson-Odoi could still be sent out on loan in the January transfer window after Chelsea manager Maurizio Sarri said the forward is not yet ready for the Premier League.

England Under-19 international Hudson-Odoi was handed his first start since the Community Shield loss to Manchester City in Thursday’s Europa League clash against PAOK at Stamford Bridge.

The Blues only needed a point to secure top spot in Group L but they recorded a comfortable 4-0 victory against their Greek opponents, who had centre-back Yevhen Khacheridi sent off just seven minutes into the contest, to make it five wins from as many games.

French World Cup winner Olivier Giroud bagged a brace in the first-half before Hudson-Odoi netted his first senior goal with a tidy finish from inside the area.

The 18-year-old then provided the cross for Alvaro Morata’s headed finish in the 78th minute as Sarri’s men bounced back from the disappointing 3-1 defeat to Tottenham Hotspur.

However, despite Hudson-Odoi getting huge praise, the Chelsea boss feels the youngster is not ready to make his mark on the senior side when it comes to the Premier League.

“I don’t know if Hudson-Odoi is able for the Premier League at 18, especially in a big team,” he said.

“If he’s good enough to play in a big team in the Premier League at 18 then he could be the best player in Europe in two years.

“I think he played very well but the type of match was for his characteristics as they had 10 men after seven minutes. We only needed to play in the offensive phase, he’s very able to do this but I want to see him in a match when he has to play in a defensive phase.”

Chelsea return to action on Sunday when they welcome Fulham to Stamford Bridge and the hosts are 1.18 favourites to pick up the win, whilst a draw is priced at 7.00 and the visitors are 15.00 outsiders.