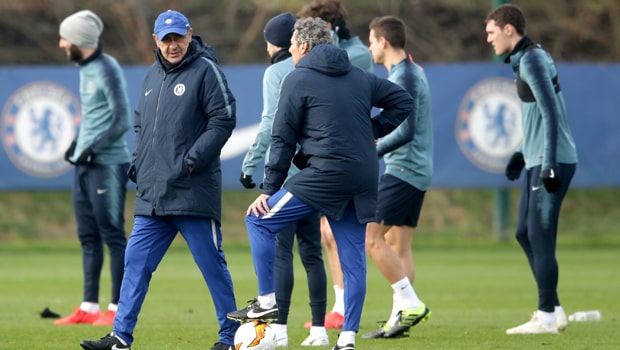 Maurizio Sarri wants to see the same levels of ‘application, determination and attention’ from Chelsea each time they take to the field.

The Blues bounced back from a crushing defeat to Manchester City in the Premier League with a professional 2-0 win over Malmo in the Europa League in Sweden.

Ross Barkley and Oliver Giroud scored in either half to put Sarri’s side in a dominant position with a second leg to come at Stamford Bridge next week.

After a 6-0 mauling by Manchester City, the Blues had lost four of their previous 10 games going into the Swedish trip.

They’ve mixed 4-0 losses to Bournemouth with a heavy 5-0 win over strugglers Huddersfield Town and Sarri knows they need to play more consistently. “In the last period we’ve had the problem of up and down, up and down,” said the Italian.

The Chelsea boss highlighted how quickly a poor run can escalate in English football, as the distraction of the Europa League knockout stage commencing appeared to help his ailing side.

“You know very well that, if you are in bad mental condition in England, in 10 days you can lose three or four very important matches. So we need consistency. We have to approach every match in the same way.

It’s not easy, but we have to try,” he added. Next up for Chelsea is an FA Cup home tussle with Manchester United on Monday.