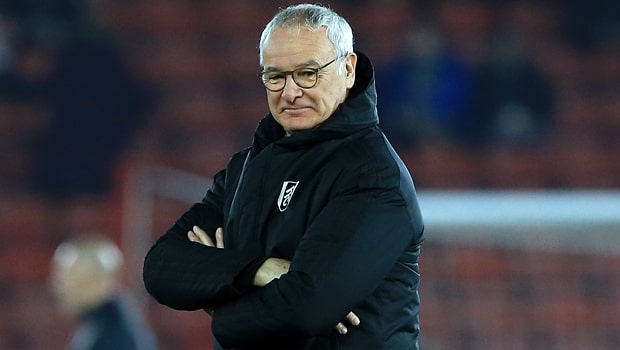 Claudio Ranieri says Fulham will carry on fighting until it is “mathematically impossible” for them to survive in the Premier League.

The Cottagers were beaten 2-0 at Southampton on Wednesday evening, a setback that left them in 19th place, ten points behind the Saints and safety.

Fulham had the lion’s share of possession in the opening half – with 64 per-cent of the ball – but they still trailed 2-0 at the break.

Oriol Romeu put the home side ahead after a poor Sergio Rico punch and James Ward-Prowse’s doubled the lead to leave Fulham in an all-too familiar position.

“It was not enough. We tried our best but every time we have to say the same thing – the first time in front of goal, the opponent scored,” Ranieri said afterwards.

Aleksandar Mitrovic fired over the bar from a narrow angle with the score at 1-0 and the big forward again shot over the bar when put through on goal a minute after the interval.

It meant Fulham could not get a foothold in the contest and Ralph Hasenhuttl’s side were able to coast to the finish line.

The manager’s substitution of Tom Cairney drew boos from away supporters at St Mary’s and while Ranieri says Fulham will keep on fighting, he suggests the players have got to produce something very quickly.

“We have to continue to fight until it is mathematically impossible. The confidence is not at the maximum level and it is not easy to react but I want them to react soon,” he added.

Fulham are 6.00 to win Sunday’s west London derby against Chelsea at Craven Cottage. The Blues dispatched Tottenham on Wednesday evening and are 1.53 to win on Sunday, with the draw 4.33.