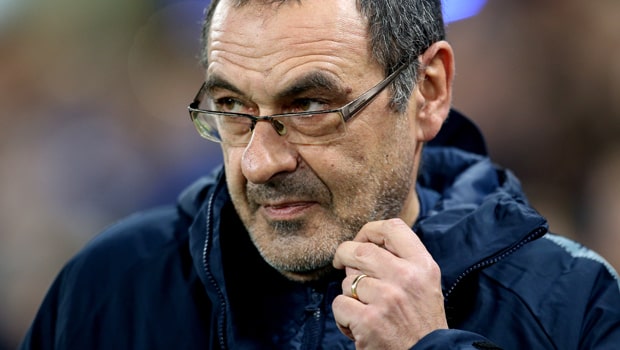 Chelsea manager Maurizio Sarri says they will “struggle to compete” with Manchester City and Liverpool unless their transfer ban is overturned.

The Blues lost their appeal against a FIFA sanctioned two-window transfer ban on Wednesday for breaking regulations over the signings of foreign youth players.

Chelsea will now take the case to the Court of Arbitration for Sport to try and get the ban lifted.

It is another turbulent chapter in Chelsea’s up and down season which seems to be ending, at least on the pitch, on a positive note, with a top-four place guaranteed while they still have a chance of winning the Europa League, with their semi-final second-leg match up with Eintracht Frankfurt.

However, Sarri is convinced that any further progress will be severely hampered by the transfer ban, and they need extra players to close the gap to City and the Reds next season.

“It’s very difficult to cover the gap at the moment; we need to work, probably we need to do something from the market,” said Sarri, with third-placed Chelsea 24 points behind league leaders City and 23 behind Liverpool.

“Of course we have to work and we have to try. In my opinion we can reduce the gap. I think we are a very good team so we need only one, two players, no more.”

Despite Sarri’s general air of pessimism, Chelsea can put a bad day behind them by qualifying for the final of the Europa League and are priced at 1.20 to go through, while Frankfurt are at 4.33 to qualify for the Azerbaijan final on May 29.

Olivier Giroud is the competition’s top goalscorer this term and the Chelsea hitman is available at 6.00 to bag the first goal.