Mason Mount limps off with Injury against Valencia 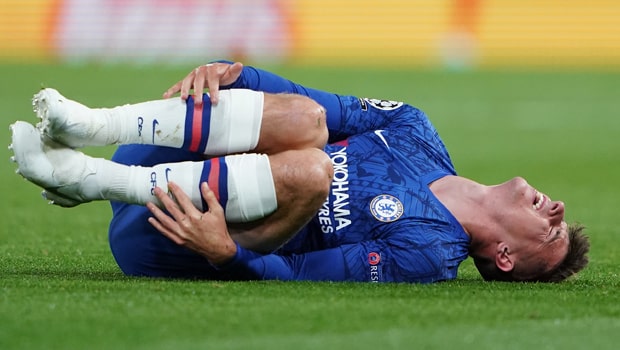 Mason Mount limped off the field after sustaining an injury in Tuesday’s Champions League match at Stamford Bridge against Valencia.

The 20-year-old Chelsea midfielder was injured after a strong tackle from former Arsenal player Francis Coquelin early in the Champions League group game at Stamford Bridge.

In the ninth minute of the match, Mason Mount went in for a tackle with Valencia midfielder Francis Coquelin and ended up limping off in pain.

The 20-year-old midfielder seemed to have sustained an injury to his ankle after a brash tackle by the Coquelin, who received a yellow card for the foul by referee Cuneyt Cakir.

Mount at first seemed to have gotten better from the challenge as he continued to play on, but in the 16th minute he was no longer able to play in the game after he got extensive treatment in the field.

After Mount left the field of play, Spanish forward Pedro replaced him in the game.

If Mount’s injury is severe, he may be forced to miss some key game, and it would be a blow for Chelsea. The former Derby County loanee has started well in his first season with the Chelsea senior team.

Mount, who is a Chelsea academy product has scored three goals in five Premier League matches for the Blues this season, with his form earning him his first-ever Champions League start on Tuesday.

Mount has been at the Chelsea academy since he was six years old in 2005.

Mount also got his first senior England cap in the recent international break. England coach Gareth Southgate called up the midfielder for the qualifying games and he came off the bench against Bulgaria and Kosovo for his first two appearances for England.

The midfielder has become one of numerous Chelsea academy players to shine in the early season as the club has turned to youth under new coach Frank Lampard.

The reason has been partly due to the club’s two-window transfer ban, which has seen several players aged 21 or less are step up to the Blues first team.

Players like Mount, Tammy Abraham and Fikayo Tomori have impressed under Lampard this season. Ross Barkley missed a penalty as Rodrigo scored to give Valencia a 0-1 win over Chelsea.