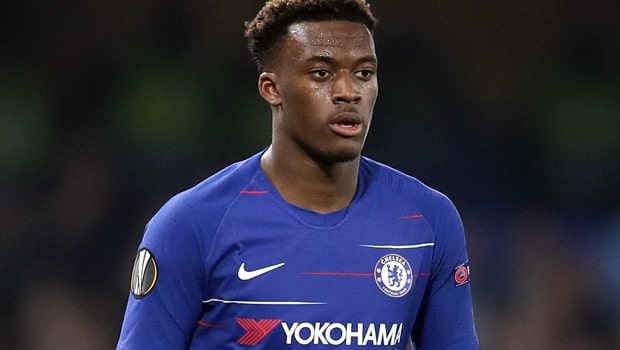 Callum Hudson-Odoi is worthy of a Premier League start in a Chelsea shirt, according to former Blues striker Jimmy Floyd Hasselbaink.

The talented Stamford Bridge teenager won his first two England caps in the past week as the Three Lions routed the Czech Republic and Montenegro, but he has never started a top-flight game for his club.

According to Hasselbaink, the 18-year-old merits a starting spot in Maurizio Sarri’s line-up before long.

“It might be that he lifts the team in a different way and gives them a different dimension,” said Hasselbaink.

“Chelsea should bring more youngsters through. I would say Hudson-Odoi deserves a chance.”

A product of Chelsea’s youth system, Hudson-Odoi has played 19 games in all competitions this term for the Blues, all of which have been off the bench.

Hasselbaink feels there is plenty to be gained from showing some of the more established stars at the club that a talented youngster will be trusted in the first-team.

He also suggests that only Eden Hazard can reasonably claim to be performing near his best in the current Chelsea side.

“Even if we are the number one, we all need sometimes to feel that there is another player or a younger player who can take our spot,” he added.

“You have to say yes, he should be given a chance, because the others in his position are not really playing well at this moment.

“The only one that is really producing his best – a seven or eight or sometimes a nine – is (Eden) Hazard.” Chelsea are 1.44 to win away at Cardiff City on Sunday, with the Welsh side 7.50 and the draw 4.33.