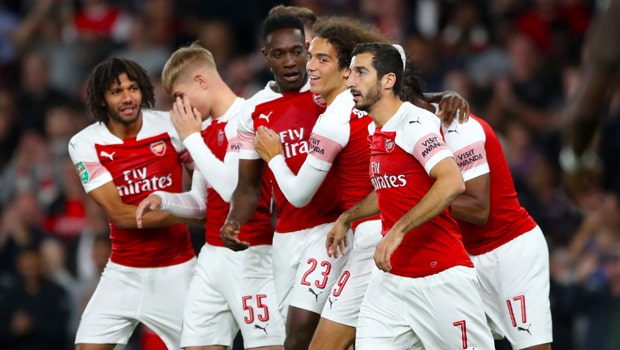 Arsenal head coach Unai Emery says striker Danny Welbeck has given him food for thought after an impressive two-goal display in the Carabao Cup win over Brentford.

The England hitman netted a brace at the Emirates as the Gunners saw off the challenge of their Championship opponents with a 3-1 success.

Welbeck finds himself behind Pierre-Emerick Aubameyang and Alexandre Lacazette in the Gunners pecking order currently but Emery was pleased with what he saw against the Bees.

“He gave us his quality and also his commitment. Danny is working with this commitment and when he is playing also with a performance like this, I think he’s helping the team and we want this,” said the Spaniard.

“Also, it’s more chances for us to find the first XI for the next matches with performances like this.”

Welbeck is now right in his thinking when it comes to making plans for the Premier League clash with Watford at the Emirates Stadium on Saturday, according to the Arsenal manager.

“For Saturday, he’s also another player that I can try to help the first XI, because he’s doing very well, with a big commitment,” Emery added.

“But also, I want the first XI with the performance and I want other players (on the bench) – when I am looking back I want to see good players looking forward to helping the game for us.”

The Gunners claimed a 3-0 victory when the Hornets visited last season, with Aubameyang among the scorers for the hosts.

Arsenal are 11.00 to win 3-0 on Saturday, while Watford are 6.50 to pick up an unlikely three points in north London.