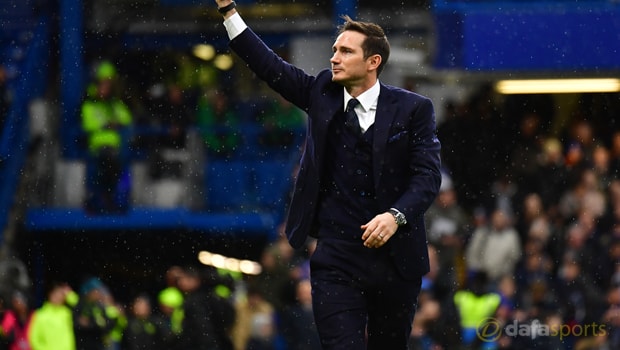 The Blues are at Old Trafford on Sunday to face Manchester United, led by their former boss Jose Mourinho.

While Antonio Conte has already defeated the Red Devils in both league and FA Cup this season, Lampard is expecting a close encounter and he also insists that what Tottenham are doing behind them will affect Chelsea’s mentality.

Tottenham swept Bournemouth aside 4-0 at White Hart Lane on Saturday, their seventh straight league success and an impressive 12th consecutive home victory on the spin.

It means they have narrowed the gap on Chelsea down to just four points ahead of the leaders’ mission at Old Trafford.

Lampard, who won three Premier League titles during a distinguished career at Stamford Bridge, expects to see an edgy Blues side.

“Chelsea are very aware that Spurs are there and it’ll be a tough game for them [at Old Trafford],” Lampard told BBC Sport.

“There will be some nervousness but so there should be.”

Should Chelsea overcome Man United for a third time this season, they’ll extend the lead back out to seven points with just six games left to play.

Conte’s men are 2.75 for the win, with Man United 2.80 and the draw 3.20. Meanwhile, Tottenham boss Mauricio Pochettino feels his team are showing they absorbed the lessons from last season’s faltering title run-in.

“We expended a lot of energy fighting against Leicester, against Chelsea, against the media,” said the Argentine.

“We fought against everyone. But now we are focusing on fighting our opponents when we play.

“From the beginning of the season that was our chance to improve our mentality, our belief, and I think you can see the group and the team have improved.”