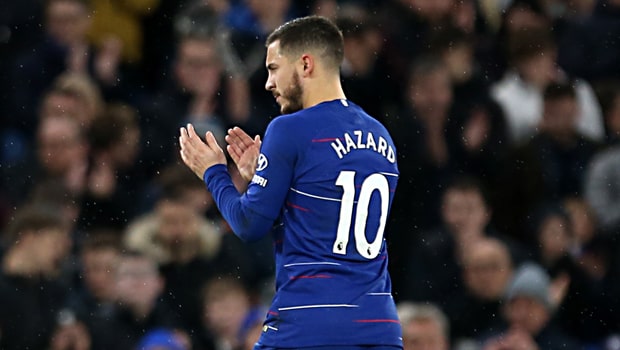 Eden Hazard has reiterated that a move to Real Madrid would still be of interest to him although he has not ruled out remaining at Chelsea for the long-term.

The Belgium international has been heavily linked with a move to the Bernabeu over recent seasons and he has made no secret of his admiration for the reigning European champions.

Indeed, Hazard was particularly keen to link up with Los Blancos when Zinedine Zidane was manager and he admits he still holds that desire even though the Frenchman left the club at the end of last season.

“I have never heard from Zidane and if he goes to Manchester United tomorrow, for example, I would not be there. “Real Madrid without Zidane is different, but it is still Real Madrid.”

Despite his interest in joining Real, Hazard, who is under contract with Chelsea until the summer of 2020, insists he could still remain at Stamford Bridge for the long-term and look to add to the five major honours he has won during his time with the club.

“I’ve won everything in England, except the Community Shield, but that doesn’t mean I’m going to leave,” the 28-year-old added.

Hazard’s form has certainly remained impressive this season, as he has scored 10 goals and provided 12 assists in his 22 Premier League appearances to date, even though he has had to play out of a position as a central striker over recent weeks.

The former Lille star is likely to lead the line once again when Chelsea play host to Tottenham in the second-leg of their Carabao Cup semi-final tie on Thursday.

The Blues trail 1-0 from the first-leg at Wembley, but they are priced at 1.95 to overcome that deficit and qualify for the final, while Spurs are available at 1.80 to reach next month’s showpiece.