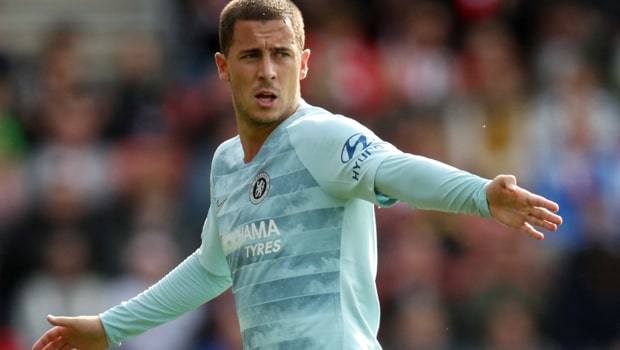 Eden Hazard has delivered a big boost to Chelsea fans by suggesting he’d be happy to finish his career at Stamford Bridge.

The Belgian playmaker has been widely linked with a move to Spain and potentially Real Madrid, something Hazard has appeared to welcome in the past, but now he suggests it is not a move he has got his heart set on.

The 27-year-forward has been at Chelsea since 2012 and has won two Premier League titles, amongst other honours, during his time in west London. After an indifferent season under Antonio Conte last term, Hazard appears to have rediscovered his mojo this time around under new boss Maurizio Sarri.

Getting away from English football isn’t a priority, with Hazard insisting there is mutual love between himself and the Chelsea faithful. “I can finish with Chelsea,” he told Sky Sports.

“No problem at all. I am very happy with this club, with the team, my family is happy here.

“So If I don’t go to Spain, it is not a problem. I love the fans – I think the fans love me! What happens in the future, I will be happy, so that’s it.”

Hazard helped Belgium to the semi-finals of the World Cup in the summer and has scored a Premier League high of seven goals this season as the Blues keep pace with joint-leaders Manchester City and Liverpool in the early exchanges.

Chelsea can take over top spot, at least temporarily, if they avoid defeat at home to Manchester United on Saturday.