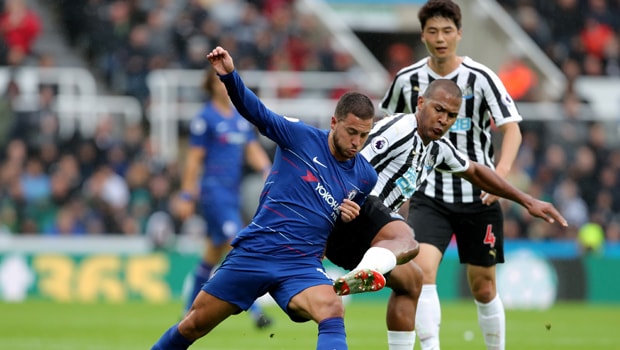 Chelsea’s Eden Hazard has played down what some felt was Newcastle’s physical approach in their Premier League game last weekend.

Hazard made his first Premier League start of the season in his team’s 2-1 win at St James’ Park and was fouled five times in the game, more than any other player.

Newcastle’s physical approach was criticised by Chelsea’s Cesar Azpilicueta but Hazard himself was more relaxed about their tactics. He said: “The Premier League is always like this – every weekend is the same.

“But I’m not complaining, I try to do my job and when you have the ball, you get kicked, so no complaints. You just try to play better.”

Hazard scored from the penalty spot at St James’ Park and after the home side equalised, DeAndre Yedlin’s own goal handed the visitors all three points to consolidate Chelsea’s perfect start to the new season under new boss Maurizio Sarri.

The 27-year-old himself is keeping his feet on the ground, though he was pleased with the good start. “We need to keep this momentum,” he added.

“We want to be at the top at the end of the season.

“It is just the beginning but confidence is coming and the goals are coming.”

Chelsea have maximum points from their three matches in 2018-19, beating Huddersfield, Arsenal and now Newcastle.

They are approaching the first international break of the season but first have a home game against AFC Bournemouth, another side who have impressed with a good start to the new campaign, winning two and drawing one of their games so far.

The Blues are 11.00 to win the Premier League title at the end of the season, while they are 1.36 to finish in the top four.