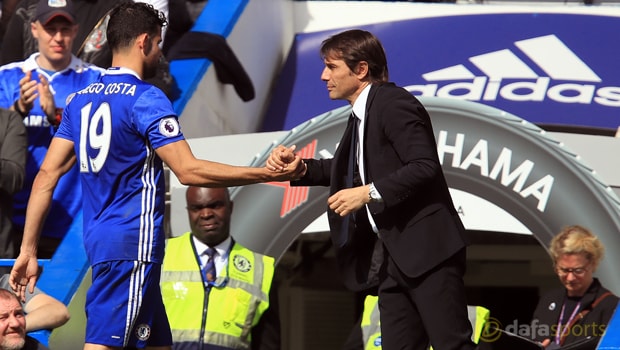 Chelsea outcast Diego Costa admits Antonio Conte is a great coach but he does not respect the Italian as a person.

The Spain international’s career at Stamford Bridge appears to be over after he was reportedly told via text message that he is no longer wanted by the club.

The 28-year-old, who has won the Premier League twice since moving to west London in 2014, is currently in his native Brazil, but he is believed to be keen on a return to former club Atletico Madrid.

Costa is unsure if a return to Spain will materialise and he has now criticised Conte’s handling of the entire situation.

Speaking to the Daily Mail newspaper, Costa said: “In January, things happened with the coach.

I was on the brink of renewing my contract and they put the brakes on it. “I suspect the manager was behind it. He asked for that to happen.

I have seen the sort of person he is. He has his own opinion and that will not change.

I respect him as a great coach. He has done a good job and I can see that, but as a person, no.”

Chelsea have struggled in Costa’s absence so far this season, losing the Community Shield on penalties to Arsenal, before being shocked in their Premier League opener against Burnley on Saturday.

The Blues are next in action when they travel to Wembley to take on London rivals Tottenham on Sunday and they are priced at 3.75 to win that match, while Spurs are available at 2.05 and the draw is on offer at 3.40.