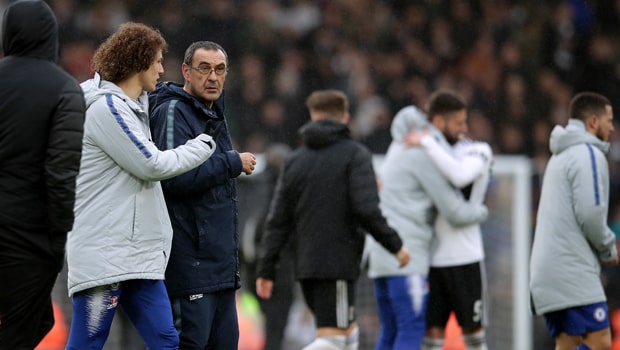 David Luiz has insisted that ‘every player’ at Chelsea remains 100 per-cent behind boss Maurizio Sarri and his footballing philosophy.

The Blues have come under intense scrutiny this season but they appear to have turned a corner following back-to-back Premier League wins over London rivals Tottenham and Fulham.

Those successes have boosted their hopes of a top-four finish this term and they’ll now turn their minds to the Europa League and last-16 first leg clash with Dynamo Kiev on Thursday evening. Ahead of the Stamford Bridge showdown, Luiz took the chance to weigh in behind his manager.

“He’s a great human, someone with the love and passion for football, someone loving with people and trying to help everybody, and trying to give the best advice.

“He’s a real person, and real people have feelings good and bad.” Sarri’s possession based style of play has drawn criticism at times this season but Luiz says Chelsea have not altered their style of late, rather attempted to make it ever more effective. There is no desire amongst the players to change tactics.

“Change the style? I don’t think so, the style didn’t change,” Luiz added.

“We just adapted some moments of the game, like the line to have high pressure or not.

“But our philosophy is to play from the back with possession and try to control the game.

“Every player believes in his philosophy and everyone is giving 100 per cent to achieve our goals.”