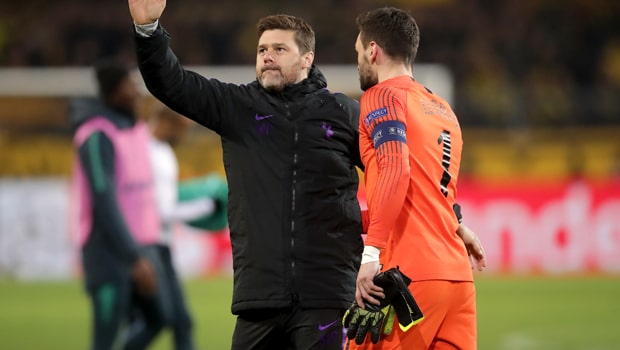 Mauricio Pochettino is proud to see his Tottenham Hotspur side into the Champions League quarter-finals, though he has warned his squad they must raise their levels again for the next stage.

Harry Kane scored the only goal as Spurs completed their last-16 passage with a 1-0 win over Borussia Dortmund in Germany on Tuesday evening.

Having won the first leg 3-0 at Wembley, Spurs were strong favourites to progress but they had to rely heavily on keeper Hugo Lloris in the first half has Dortmund tried hard to get back into the tie.

The Frenchman produced some outstanding saves, something that didn’t surprise the Spurs boss. “It was a massive game for us, very tough, but I feel very proud,” said Pochettino.

“We fully deserved this. We scored four goals, did not concede, and this was against a team that is top of the Bundesliga with great players.

“We suffered a bit in the first half. We conceded more chances than we expected, but that is football. They had nothing to lose and were taking a lot of risks.”

Spurs will play in the last-eight for the first time since 2011 and Pochettino is warning his players it will get tougher after their Dortmund demolition.

“The mentality was good and I’m so happy for the players and the fans. It is so important to be in the quarter-final, but you need to show more if you want to be at the next level,” he added.

The next round commences on April 9-10, with return games to be played a week later and Spurs are confident they’ll be in their new home for the quarter-finals.

“I expect to play in the new stadium. The wish is to play,” Pochettino added. Tottenham are 13.00 to win the Champions League this season.