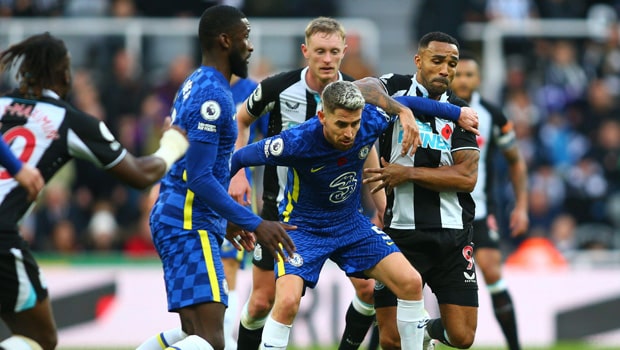 The Blues didn’t have it rosy as they were held for more than an hour until Reece James smashed in a double in the 65th and 77th minute.

Jorginho then made it 3-0 from the spot moments later as Thomas Tuchel’s side enjoyed a better second half.

While the result leaves Newcastle second from bottom, Chelsea would have been glad to grind out the win as they currently lead Liverpool in second by 3 points after the Reds were held to a 2-2 draw by Brighton.

Jordan Henderson had given Liverpool the lead in the 4th minute before Sadio Mane made it 2-0 20th minutes later. It could have been a third in the 34th minute but the Senegalese effort was ruled out by the VAR for a handball.

Enock Mwepu made a comeback easy and possible with a strike four minutes before the break.

Leander Trossard then equalised for the visitors in the 64th minute as they kept up with the momentum at the upper end of the table.

Brighton may be winless in their last five Premier League games but they are still closer to the top four sitting in seventh with sixteen points, just one shy of the Europa league places and 4 points away from the UEFA champions league places.

Meanwhile, Wilfred Zaha and Connor Gallagher scored in each half respectively to help Crystal Palace stun Manchester City at Etihad with a 2-0 win.

Pep Guardiola’s side finished the game with ten men after Aymeric Laporte was red carded in the first half.

Meanwhile, Manchester United eased the pressure on Ole Gunnar Solksjear while putting Nuno Espirito Santo under more pressure with a 3-0 win over Tottenham.

The result saw reports fly in on Sunday that the Portugese manager may be shown the exit door sooner than expected with former Chelsea manager Antonio Conte tipped to replace him.