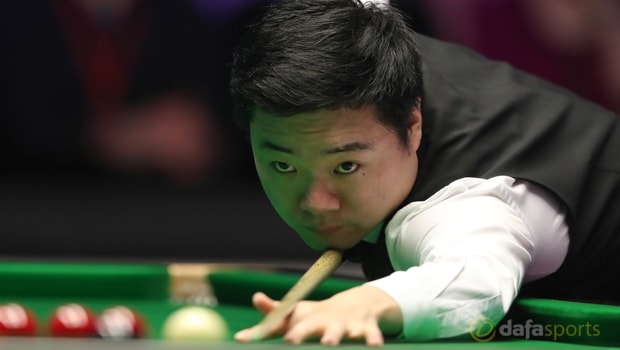 China’s Ding Junhui will be looking to rediscover his best form when beginning his 2018 Players Championship campaign against Northern Ireland’s Mark Allen on Monday.

Former world number one Ding started the season in impressive fashion, winning the 2017 World Open, but his form in 2018 has been below his best and there are doubts over how far he can go in Wales this week.

The Chinese star, who will be aiming to break his World Championship duck at the Crucible this year, did reach the 2018 World Grand Prix final but he suffered a first-round exit at The Masters and exited the Welsh Open at the second stage last time out.

A big improvement will be required for the 30-year-old to win the Players Championship but his previous form at the tournament is good, having won the 2012/13 event whilst reaching the semi-finals last year.

Ding, who has 13 ranking events to his name, has a tricky opening clash against Northern Ireland’s Allen, who won the Masters this year after beating England’s Kyren Wilson 10-7 in the final.

This will be the 14th meeting between the pair and the first since the Chinese star recorded a comfortable 5-2 victory at the last-16 stage of the Shanghai Masters.

Ding, although not being in fantastic form ahead of the tournament, is the narrow 1.73 favourite whilst Allen, who won the event two years ago, is 2.10.

The latter, who lost in the final of the International Championship this season, recently reached the last-16 stage of the Romanian Masters before bowing out to Wilson 4-2.