Chelsea: ‘Slip-up could be fatal’ – Ramires 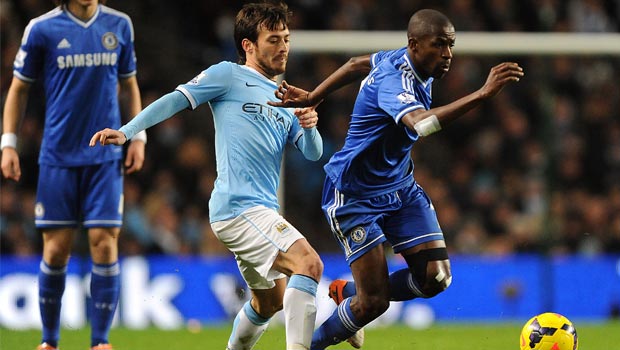 Chelsea midfielder Ramires has warned his team-mates against complacency, with the Brazilian urging the side to keep the pressure on Manchester City in the Premier League title race.

The Blues moved seven points clear at the top of the table by thumping Tottenham Hotspur 4-0 on Saturday evening, thanks to goals by Samuel Eto’o, Eden Hazard and a brace from Demba Ba.

The result also moved Jose Mourinho’s men nine points clear of Manchester City in fourth, although the 2011-12 Premier League champions do have three games in hand, a factor which Ramires has given huge significance to.

“Manchester City have games in hand and a lot can happen,” he said. “We have to keep focusing on a game at a time, we can’t fall into the trap of thinking that everything is okay.”

It is the impressive home form which has helped Chelsea climb to top spot in the league, with the victory over Tottenham extending Mourinho’s run of games at Stamford Bridge without defeat to 75.

The Blues face a tough spell ahead of them though, as they have three games in a week, beginning with the trip to Aston Villa on 15th March, which they are heavily fancied at 1.41 to win, followed by home matches against Galatasaray and Arsenal.

Ramires has lauded the fan support at Stamford Bridge, admitting the team have been spurred on in matches when the performances haven’t always been to a high standard.

“The fans at Stamford Bridge have been our 12th player, they are creating an atmosphere which really helps our team,” he added.

“It’s hard not to be excited right now but there is still a lot to be done before we can talk about the title.”