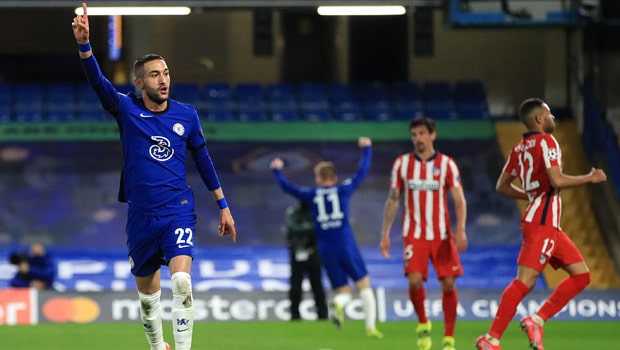 Chelsea got past Atlético Madrid 3-0 on aggregate to move into the quarter-final of the competition for the first time in seven years.

The Blues last got to the last eight of the UEFA Champions League in the 2013/2014  season when they got to the semifinals where they were defeated by the same Atlético Madrid.

The road to this stage of the competition this season hasn’t been straightforward having finished first in a group that had Sevilla, Krasnodar, and Stade Rennes.

The Pensioners changed their head coach from Frank Lampard to Thomas Tuchel in January, the German manager bringing in bigger UEFA Champions League experience than Lampard as he previously led PSG to the final against Bayern Munich last season.

Olivier Giroud had given Chelsea the first-leg win in a 1-0 victory but the second leg was always hanging in the balance.

The Blues started with Hakim Ziyech scoring the opener at the 34th-minute mark, his first goal of the year for Chelsea.

The second goal didn’t come until the final minutes of the game when Emerson put a shot past Jan Oblak in Atletico’s goal giving Chelsea a 3-0 aggregate scoreline.

Chelsea joins Bayern Munich, who defeated Lazio 2-1 on the might and 6-2 on aggregate, and Dortmund, Manchester City, Liverpool, Porto, PSG, and Real Madrid in the quarter-finals.

Thomas Tuchel’s side will know their Quarter-final opponents on Friday when the draws are made in Nyon.

Chelsea’s next game is against Sheffield United on Sunday in the FA Cup while Atletico will return their focus to the La Liga which they lead with four points.

Diego Simeone’s men will face Alaves in the La Liga on Sunday with the league being their only chance at lifting a trophy this season.