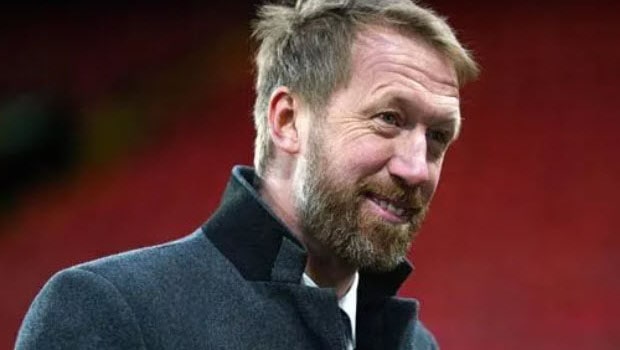 Potter becomes manager No. 30 in the London club’s history.

“I am incredibly proud and excited to represent Chelsea FC, this fantastic football club,” Potter said on Thursday.

Chelsea paid approximately £16 million for Brighton & Hove Albion to release him from his contract.

“I would also like to place my sincere thanks to Brighton & Hove Albion for allowing me this opportunity and in particular Tony Bloom and all the players, staff and supporters for their continued support during my time at the club,” Potter added.

Sources had reported during the week that former Real Madrid manager Zinedine Zidane and former Tottenham manager Mauricio Pochettino were also on a short list of targets along with Potter.

Chelsea spent more than £270 million during the summer, making nine signings. The club is in sixth place in the Premier League after six games so far.

“We are thrilled to bring Graham to Chelsea,” Chelsea’s American owner Todd Boehly said via written statement on the club’s website. “He is a proven coach and an innovator in the Premier League who fits our vision for the club.”

“Not only is he extremely talented on the pitch, he has skills and capabilities that extend beyond the pitch which will make Chelsea a more successful club. He has had a major impact at his previous clubs and we look forward to his positive impact at Chelsea. We look forward to supporting him, his coaching team and the squad in realizing their full potential in the coming months and years.”

Tuchel was let go just 350 days into his Chelsea campaign. He became the first manager in the club’s history to reach the final of all the major tournaments, including: League Cup, FA Cup, and UEFA Champions League.

Potter joins the Blues on a five-year deal, with reports indicating he’s been guaranteed a ramp-up period to acclimate to a new club and roster.

“I am very excited to partner with Chelsea’s new ownership group and look forward to meeting and working with the exciting group of players and to develop a team and culture that our amazing fans can be proud of,” Potter said.