Posted by OLADIPUPO MOJEED on September 19, 2022 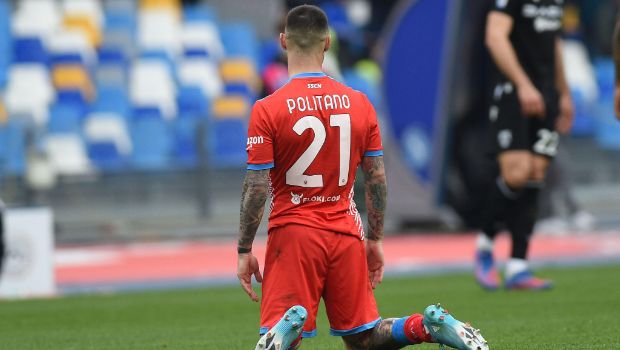 Napoli have cemented their spot at the summit of the Serie A table after ending AC Milan’s 22 games unbeaten record on Sunday at San Siro.
The Naples club secured maximum points away from home courtesy of goals from Matteo Politano and Giovanni Simeone.

Going into the clash, both teams were joint leaders on the table alongside Atalanta, which secured a memorable win at the Stadio Olimpico against Roma on Sunday.

The hosts made a good start and nearly scored when Rade Krunic found Olivier Giroud. Alex Meret fingertipped his shot onto the crossbar.
Simon Kjaer got into the referee’s book after taking down Khvicha Kvaratskhelia on the outside edge of the box. Giroud’s acrobatic flicked went off the bar on a Krunic assist when he should’ve left it for Davide Calabria.

Meret later stopped the host from going into the lead with another sensational reaction save on Krunic’s header from a corner at the back post.

Matteo Politano’s header at the far post also put Mike Maignan on his toes, and a Kvaratskhelia back-heel flick couldn’t find the net.
After Kvaratskhelia got Calabria and Kjaer booked, Stefano Pioli replaced them with Pierre Kalulu and Sergino Dest at halftime.

The Georgian continued to be a menace and eventually secured a penalty. Dest was spotted via VAR after catching Kvaratskhelia on the side of the foot, resulting in a penalty. Politano converted with a shot hard and low through the middle as the ball squirmed under Maignan to give Napoli the lead.

As Milan continued to fight back attack after attack, they eventually restored parity through Giroud. The French world cup winner got his third consecutive Serie A goal. Brahim Diaz and De Ketelaere combined well to release Theo Hernandez. The left-back released a pass to Giroud, who peeled away from defenders to turn in the ball undisturbed from eight yards.

As Milan were pushing hard for the winning goal, Napoli restored their advantage through Giovanni Simeone’s header. The striker got away from Fikayo Tomori for a glancing header on the smart Mario Rui cross from the left to score the goal that secured maximum points for the visitors.