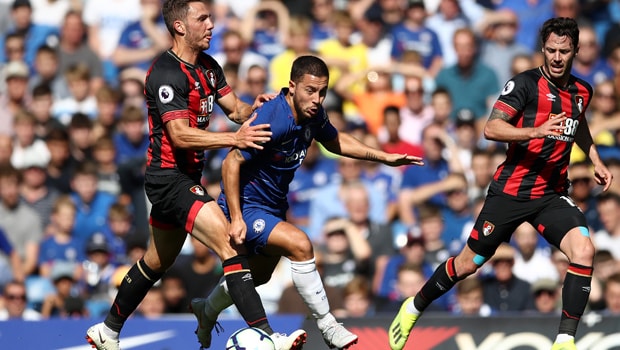 Chelsea forward Eden Hazard has enjoyed a strong start to the 2018/19 season and feels he can continue to thrive under new manager Maurizio Sarri.

The Belgian was heavily linked with an exit from Stamford Bridge this summer after growing tired of Chelsea’s style of play under Antonio Conte.

Chelsea, who are priced at 11.00 to win the Premier League, opted to part company with the Italian in the off season and Sarri was drafted in after impressing during his stint in charge of Napoli.

Sarri’s attacking approach has helped Chelsea to win their opening four games of the season and his arrival appears to have played a key role in convincing Hazard to stay at the club.

The Belgian has only started two of their four games, having been slowly reintroduced to the squad after his exploits at the World Cup, but he already boasts two goals and two assists.

Hazard insists he is happy in west London and believes new signings Jorginho and Mateo Kovacic have also added a new dimension.

“It’s not so different (from the past),” Hazard said.

“The big difference is we bring two players – Jorginho and (Mateo) Kovacic – and they are completely different.

“We just try to keep the ball more often and then when we have a chance to score, we need to score.

“But when we have more ball we can be more dangerous.

“I like this type of game. It’s completely different than Antonio Conte or (Jose) Mourinho before.

“We’re playing good football, so we enjoy. I want to keep this momentum.”