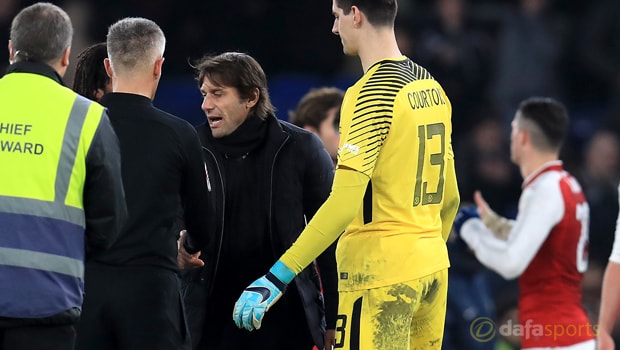 Chelsea boss Antonio Conte has called for his side to sharpen up in front of goal after they were held to a 0-0 draw by Arsenal in the first-leg of their Carabao Cup semi-final tie.

The stalemate at Stamford Bridge was Chelsea’s second successive goalless draw following on from their clash with Norwich in the FA Cup last weekend, and the result leaves the semi-final tie in the balance ahead of the return leg at the Emirates Stadium later this month.

Conte’s men certainly created a number of opportunities to score during Wednesday’s match, but they were unable to take any of those chances and the Italian admits he is growing concerned by their recent failings in front of goal.

“We shot 20 times. We created chances to score, but we didn’t take them,” Conte said.

“I think in the last period we must be more clinical, better offensively. Otherwise, if you don’t score, if you’re lucky the game finishes in a draw.”

However, the 48-year-old admits he would be more concerned if his side were not creating chances and he has refused to label all the blame at the feet of his forwards, as he believes the entire team needs to sharpen up their finishing.

“Honestly, I think you must be worried if you don’t create chances to score and it becomes very difficult to score. This team in every game creates chances to score,” Conte added.

“This season maybe we’re a bit unlucky. We’re not so good to take these chances. My speech is not for the strikers. For example, Christensen had two fantastic opportunities to score.”

Chelsea will be hoping to rediscover their scoring touch when they play host to Leicester in the Premier League on Saturday.

The Londoners are priced at 1.33 to emerge from that contest with all three points, while the Foxes are available at 10.00 and the draw is on offer at 4.75.