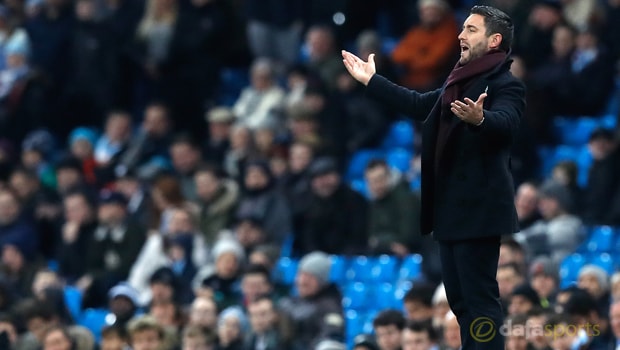 Lee Johnson was proud of his Bristol City team despite a late 2-1 defeat in their Carabao Cup semi-final first leg against Manchester City at the Etihad Stadium.

The Championship side rolled up at the home of the runaway Premier League leaders and played some neat and tidy football against Pep Guardiola’s superstars.

Bobby Reid had them dreaming of another famous upset when he converted a penalty to give them a half-time lead, but Kevin De Bruyne levelled early in the second half before sub Sergio Aguero grabbed the win for City during injury time.

Having dumped out Manchester United in the last eight and shown their credentials against the best team in England, Johnson says his men showcased their talents to a wide audience.

Guardiola was quick to pay tribute to Johnson at the final whistle and the Robins chief says that is something his players will take pride in.

“It was an interesting conversation,” Johnson said.

“A short one, but a conversation that I can pass on to the players, and the credit and the kudos that he has given our football team for coming here and trying to play our way.

“We succeeded in that on a number of occasions. We had to respect that, at times, we will be defending, but we also tried to attack.

“There was some really good play and some really good individual performances, and I think that the world has seen what Bristol City are about. I think it has enhanced the players’ reputation just that little bit more.”

Manchester City are now favourites to win the Carabao Cup at 1.44 while Bristol City are 41.00 to lift the trophy at Wembley.