Blues focused on job in hand 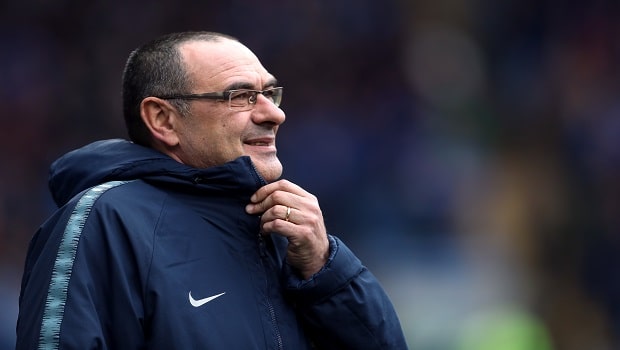 Maurizio Sarri says Chelsea can only afford to focus on their own games as the race for top-four places intensifies.

The Blues host London rivals West Ham at Stamford Bridge on Monday evening knowing three points will take them above Arsenal and Tottenham into third place – albeit having played a game more by that point.

Sarri’s side have got six games remaining and enter the West Ham clash in fifth spot, level on points with Arsenal, who were beaten by Everton on Sunday. With Manchester, in sixth, beaten last time out by Wolves, the Chelsea manager is forecasting more twists and turn and says there’s no guarantee his team will require six wins to finish in the top four.

With a trip to title-chasing Liverpool ahead of them this weekend, Sarri knows they must put everything into overcoming West Ham, first and foremost. Asked whether Chelsea need to win every game to make the top four, Sarri responded:

“No, because I think the last part of the season will be really very difficult for every team. “We have only to fight and to think about our matches, and then I think we have to fight until the last minutes of the last match. But without looking at the other results, I think.”

It’s 17 years since West Ham won a league game at Stamford Bridge, while Chelsea are unbeaten in 13 games against their London rivals.