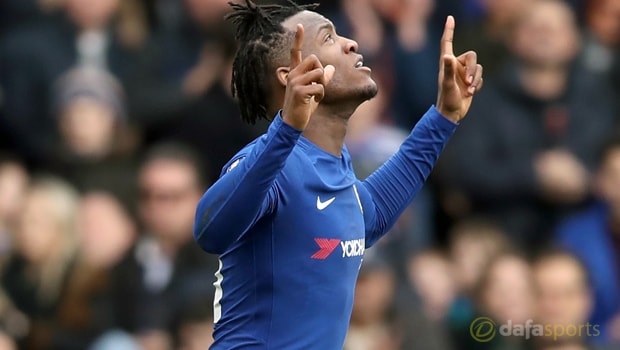 Antonio Conte admits Michy Batshuayi may leave Chelsea on loan if the Blues bring in a new striker before the transfer window closes.

Belgium international Batshuayi has had to make do with limited first-team opportunities since moving to Stamford Bridge from Marseille during the summer of 2016, as he has made just 11 starts in all competitions this season.

Despite his lack of game time, the 24-year-old has managed to score 10 goals to date this term, including a brace during Chelsea’s 3-0 victory over Newcastle in the FA Cup fourth round on Sunday.

Batshuayi certainly impressed during that match, but with Chelsea reportedly looking to bring in a new striker before the transfer window closes, most notably Roma forward Edin Dezko, his first-team opportunities could be limited further.

This has led to talk that Batshuayi could leave the west Londoners on loan for the rest of the campaign, with Conte admitting that is a distinct possibility, although he insists the Blues must first bring in a replacement.

“If the club decides to add another player, I don’t know if Michy wants to stay or go on loan,” Conte said.

“This is a player decision, not mine. I want to continue to work with my players.

It remains to be seen whether Batshuayi will still be a Chelsea player ahead of their next match, a home clash with Bournemouth in the Premier League on Wednesday.

Chelsea are priced at 1.30 to secure all three points from that contest, while Bournemouth are available at 11.00 and the draw is on offer at 5.50.