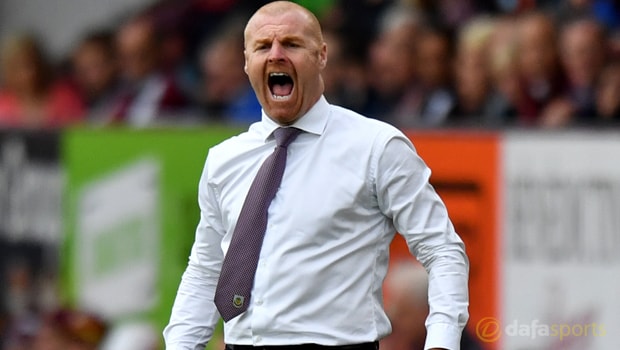 Burnley boss Sean Dyche has called for sterner punishment to be handed down to players guilty of simulation in football.

Dyche was unimpressed by Rajiv van La Parra’s attempts at trying to win Huddersfield a penalty in Saturday’s scoreless draw with his side at Turf Moor.

The Clarets boss doesn’t want a ban imposed on the Huddersfield man but he insists football in general must get its act together when it comes to diving.

He said: “My only gripe is they’ve got to change the rules on retrospective bans because I’ve seen a player blatantly dive in a manner that is unacceptable in football.”

When asked if he thinks Van La Parra should be banned, Dyche added: “No, I’ve got nothing against the player, I don’t know him well enough.”

However, Dyche would be in favour of retrospective punishment for diving in the future and he says football’s power brokers should be looking into it.

“I’m saying there’s this new rule, in theory…if that’s a penalty, he then scores, or they score, we get nothing, and that player retrospectively gets something.

But now they don’t get a penalty, they get nothing. It’s unacceptable in my opinion,” he added.

Burnley had a decent chance to win the contest in the second half when Stephen Ward’s cross found Chris Wood but the striker couldn’t direct his header on target.

Overall, Dyche felt his side lacked the cutting edge to break down their well organised visitors.

“We knew we would have to try to break down a block defence at times, and that’s tricky.

We lacked a cutting edge, Woody had a great chance from Wardy’s cross, but overall I’m happy to get another point on the board,” Dyche added.

“Credit to Huddersfield, they gave a good account of themselves, they played a lot on the break and they’ve already got a good number of points on the board this season. We take that point and move forward.”

Burnley are 3.00 to be relegated this season while promoted Huddersfield are 2.63 to go straight back down to the Championship.