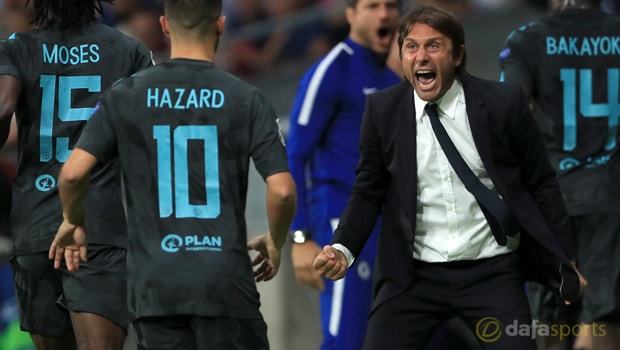 Antonio Conte believes Chelsea showed they are a force to be reckoned with in the Champions League in Wednesday’s 2-1 win over Atletico Madrid.

Having opened their campaign with a routine 6-0 victory over Qarabag, the Blues headed to Spain for the first ever European game to be played at Atleti’s new Wanda Metropolitano Stadium.

An unnecessary tug by David Luiz on Lucas Fernandez allowed Antoine Griezmann to open the scoring from the penalty spot after 40 minutes but the Premier League champions hit back after the break.

Alvaro Morata grabbed an equaliser just before the hour and just as it appeared that both sides had settled for a draw, substitute Michy Batshuayi grabbed the winner with the last kick of the game.

Having won last term’s Premier League title without the distraction of European football, questions were asked as to how well Conte’s men would handle balancing the additional challenge.

They appear to have settled back in nicely and now sit top of Group C going into their double-header with Roma.

Chelsea are 15.00 for the Champions League and after Wednesday’s win, the boss believes they showed they are worthy of Europe’s top table, while also expressing his delight at Eden Hazard’s performance.

Conte told BT Sport: “They showed we deserved to play these types of games.

“We must be very happy because Eden Hazard’s performance was amazing and it was the first big game for him after his injury.”