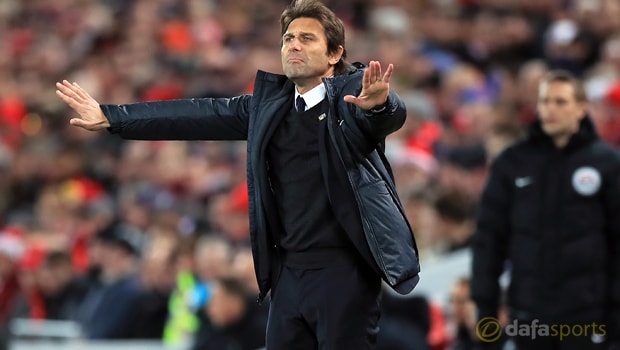 Antonio Conte believes Chelsea did enough to secure all three points during their 1-1 draw with Liverpool at Anfield on Saturday.

The Blues looked in danger of losing the match when they fell behind to a strike from their former player, Mohamed Salah, during the second half, but substitute Willian salvaged a point with five minutes remaining.

Despite the late nature of their comeback, Conte believes his side did enough to secure all three points from their trip to Merseyside, although he was pleased with the battling spirit his players showed to come from a goal down.

“I think we were unlucky, if you see the dynamic of their goal,” Conte said.

“But at the same time I’m very happy to see a good reaction of my players.

A great desire, a great will to fight, a great desire to not accept the result against Liverpool.
We tried to win the game. We must be pleased despite the draw.”

The Italian was also pleased with his team’s energy levels, particularly as Chelsea had little recovery time following their long trip to face Azerbaijani outfit Qarabag in the Champions League on Wednesday.

He added: “Both teams played with a great intensity from the start until the end. For us, it was very difficult to play this game after our long travel and after no rest for my players.”

Chelsea will be back in action during the week, when they play host to struggling Swansea in the Premier League on Wednesday.

The West Londoners are priced at 1.20 to win that match, while the Swans, who are currently languishing in the Premier League relegation zone, are available at 13.00 and the draw is on offer at 7.50.