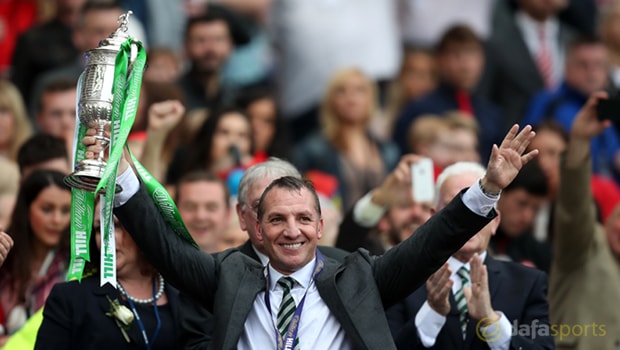 Brendan Rodgers says it has been a “dream” debut season at Celtic after Saturday’s Scottish Cup final victory completed a domestic unbeaten treble for the Bhoys.

Celtic arrived at Hampden Park looking to become the first team in Scottish football history to complete an unbeaten domestic treble and they achieved this feat in dramatic fashion.

Republic of Ireland international Jonny Hayes had given Aberdeen the lead inside the opening 10 minutes but 25-year-old midfielder Stuart Armstrong grabbed an equaliser from 20 yards out just two minutes later.

The match appeared to be heading for extra-time until Australian Tom Rogic produced a moment of brilliance, dribbling past two opponents before smashing in at the near-post in the 92nd minute.

It capped off a sensational season for Celtic that has seen the club go unbeaten and Rodgers revealed his delight after snatching the late winner against Aberdeen.

“It’s been incredible,” he told BBC Scotland. “I couldn’t have written the script any better.

It’s been a dream. I was born into Celtic and it’s a huge privilege to manage this club.

“If you’re going to create history, which we’ve done, then you have to make it happen and the players have done that.

Now you can write about it and talk about it, give a big congratulations to the players and supporters, because they’ve been amazing.

It’s a great day for the club.” Attentions are now being turned towards the 2017/18 campaign and the Hoops will be hoping to make a better impact in the Champions League this time round.

Rodgers’ men finished bottom of their group in Europe this term, failing to win any of their six matches whilst they were on the receiving end of a 7-0 battering by Barcelona at the Camp Nou.