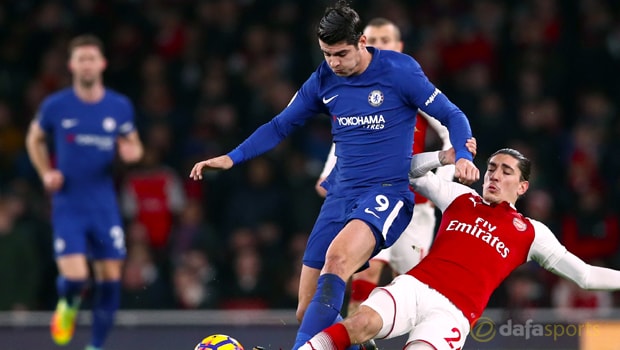 Chelsea boss Antonio Conte has backed Alvaro Morata to bounce back after missing a string of chances in Wednesday’s 2-2 draw at Arsenal.

On a hugely entertaining evening at the Emirates, the Blues looked set to claim all three points when Marcos Alonso netted late on, only for Hector Bellerin to equalise in stoppage time.

Amongst all this, Morata missed a hatful of chances and was left facing questions about his finishing ability in the aftermath of the game.

The 25-year-old arrived from Real Madrid in the summer and despite netting 12 times for the club, doubts remain over his ability to convert chances.

Diego Costa’s departure to Atletico Madrid has left him without any real competition, with Michy Batshuayi clearly still to convince Conte.

The boss is confident Morata will eventually prove his worth, insisting he just needs a change of luck.

He told reporters: “This is not a lucky period for him because at the last game versus Stoke I said it is very important for the striker to have the chance to score, and here today he had chances to score but it is football.

“I am very happy for his commitment and his effort for the team, this is the most important for me but for the striker it is important to score because then your confidence is up.

“The only things I can tell him are to stay calm and continue to work in this way for the team because then the chances will arrive for him and for the other players.”

Chelsea are currently 2.75 to win the Premier League without Manchester City and 26.00 for the Champions League outright.