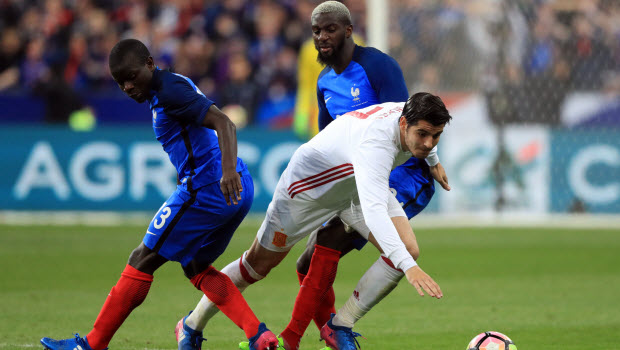 Alvaro Morata admits he is raring to go after flying into London ahead of his medical at Chelsea.

Following months of speculation, the Blues confirmed on Wednesday night that they had finally agreed a fee with Real Madrid believed to be worth an initial £58m, potentially rising to £70m.

Morata had previously been linked with Manchester United but now looks all set to link up with Antonio Conte, who signed him for Juventus in 2014, only to leave to coach Italy soon after.

Morata’s arrival appears to confirm the end of Diego Costa’s time at Stamford Bridge and he will be amongst some familiar faces, with fellow Spanish internationals Pedro, Cesc Fabregas and Cesar Azpilicueta already in Conte’s squad.

Having played in both La Liga and Serie A, the 24-year-old is excited about testing himself in the Premier League, with Chelsea 4.33 to defend the title they won in impressive style last term.

After flying into London, Morata admits he is ready for the new chapter in his career and is looking forward to completing his medical and getting down to business in England.

“This is the best club,” Morata told Sky Sports News. “Antonio Conte is one of the best coaches in the world and I’m so happy to work with Antonio.

“[It’s] One of the best leagues in the world and I’m so happy to be here. I spoke with Azpilicueta and he told me everything is OK and he found it something easy.”

Morata’s first piece of business could be the Community Shield on August 6, a trophy the Blues are 1.44 to win, with rivals Arsenal 2.63.