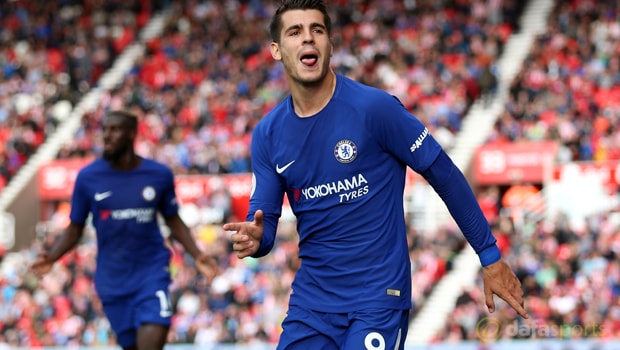 Chelsea shelled out a club-record £60million this summer to sign Real Madrid forward Morata and the new arrival has made a fantastic start to life at Stamford Bridge.

The Spain international, who has netted 12 times for his country, has scored six goals from six Premier League appearances and bagged a hat-trick in the 4-0 victory against Stoke City last time out.

Antonio Conte’s men face a tricky Champions League trip to Atleti on Wednesday night but the Blues are in good form, having gone seven games unbeaten across all competitions.

Courtois, who enjoyed three successful years on loan at Atletico, is not worried about his return to the Spanish giants but he has warned Morata to expect some stick from the home crowd due to his previous time with Los Blancos.

“He will get a different one from me. Alvaro played a lot of games against Atletico. I think he scored, I am not sure, so for him it will be a big game against his rivals,” he told the club’s official website.

Atletico have been impressive form this season, winning four and drawing two of their six La Liga games, and Diego Simeone will be confident of taking all three points on home soil.

The hosts are 2.10 favourites for the win, a draw is priced at 3.20 whilst the defending Premier League champions are 3.60 outsiders to take all the spoils.

Diego Costa, who will re-sign for Atleti from Chelsea in the January transfer window for a reported £50million, is expected to be in attendance for the European encounter.