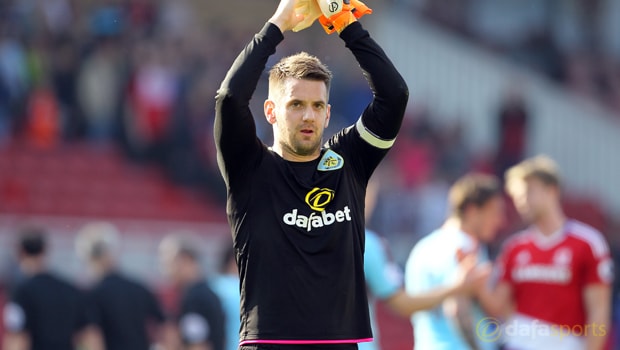 Former Burnley goalkeeper Chris Pearce believes the club have one of the best custodians around in Tom Heaton.

Pearce knows a thing or two about playing in goal for the Clarets, having made 236 appearances for the side between 1987 and 1992.

Current number one Heaton has proved himself to be one of the most consistent stoppers in the country in recent years and has been rewarded with a regular place in the England squad.

He will again need to be at his best in the upcoming campaign, as the Lancashire outfit aim to a avoid relegation from the Premier League, a fate which is currently priced at 2.25.

At 31, Heaton is about to reach his peak years as a goalkeeper and his leadership qualities have also seen him wear the armband in recent seasons.

Pearce believes the club have a real asset in the former Manchester United youngster and has backed him to continue receiving international recognition.

“He’s so consistent, if he doesn’t get more England caps then there’s something wrong, especially with the way he’s playing,” Pearce said.

“He looks the part in goal to me. “He looks very confident in the area, it’s a bit like Joe Hart with his presence in goal.

Joe Hart has always looked very confident, even when he’s not playing well.

“I think Tom’s one of the best goalkeepers in the Premier League, and there’s a couple of very good ones in the league.”

Burnley face a tough test on the opening weekend of the season when they travel to champions Chelsea for a game they are 10.00 to win, with the draw 7.00 and the Blues priced at 1.22.